Although geographically Italy is a relatively small country (less than half the size of Texas) it boasts over 20 distinct regions, each with their own unique culinary traditions and specialties. The dishes most Americans think of as “Italian Food” such as red-sauce specials like spaghetti and meatballs, ziti, and pizza are often interpretations of dishes brought to the US by immigrants vs a true representation of the wide range of cuisine this food-centric culture enjoys!  Fun fact: tomatoes were actually brought BACK to Italy from explorers to the Americas in the 15th or 16th century.

The local cooking and food customs in Italy have been handed down for generations and are often driven by geographic, historic and weather differences. The country’s long coastline with ready access to seafood, chillier northern mountainous regions, and sun drenched Mediterranean areas in the south are one factor. Additionally some regions have picked up cooking influences from the neighboring countries of France, Switzerland, and Austria while others were influenced by Greek and Middle Eastern flavors and foods.

Across the country every region, city, and even village has its own unique culinary twists and delicious specialties – here’s a roundup of foods and dishes from iconic regions in Italy.

In this northern Italian region just below Switzerland meat and dairy plays a major role in cooking with butter beating out olive oil and rice and polenta being served way more often than pasta.  Here you’ll find braised veal shanks known as Osso Bucco, endless varieties of risotto, as well as region-specific cheeses such as taleggio, gorgonzola, and robiola.

Our Pea, Leek, and Pecorino Risotto is a fantastic taste of Lombardy! 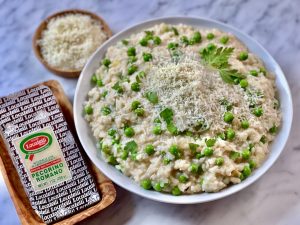 Often referred to as the culinary capital of Italy, this large region of northern Italy is the birthplace of Bolognese sauce from the capital city of Bologna. It’s also known for handmade eggy tortellini, rich aged balsamic vinegars from Modena, a wide variety of cured meats such as Prosciutto di Parma and of course the iconic Parmesan Reggiano, also hailing from Parma. 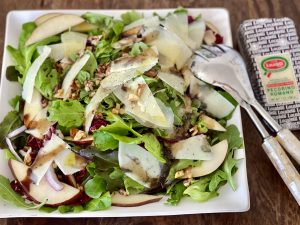 The cradle of the Renaissance was in the capital city of Florence funded by the wealthy Medici family who also influenced food production in the region. So many Italian food traditions hail from Tuscany including Steak alla Fiorentina, Chianti wine making, and olive farms producing fresh pressed olive oils.  Bread plays a large role in the cuisine of the region too and is often incorporated into salads and soups such as Ribolittla and Panzanella.

Try our Panzanella recipe for a taste of Tuscany! 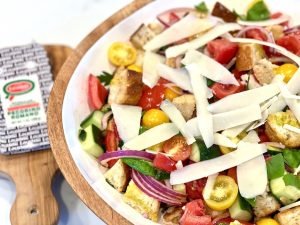 Try our Spaghetti Carbonara recipe for a taste of Lazio! 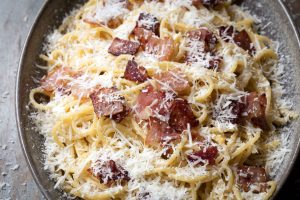 The sunny region of Campania with its capital of Naples is known for its fertile volcanic soil (yes, Pompei is right nearby!) This soil is key to the region’s infamous San Marzano tomatoes, as well as other produce such as eggplant, peppers, figs, and lemons. That pizza we all know and love? It’s a spin off of Neopolitan street food brought to the US by both immigrants from the region as well as WWII vets who returned home raving about the local dish.  Campania is also known for fresh mozzarella, limoncello, and some of your favorite comfort food Italian dishes.

Pasta Puttanesca also hails from this region – give our recipe a try! 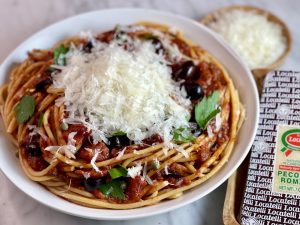 Located just off the “toe” of Italy, Sicily is actually the largest island in the Mediterranean! It’s also home to Mount Etna and that volcanic soil is responsible for juicy blood oranges, olives, lemons, olives, and endless produce.  Eggplant Caponata is an iconic dish of the region as well as seafood centric meals such as Pasta con le Sarde (pasta with locally caught sardines). Sicilians also claim to have invented the beloved Italian meatball known as Polpetta here.

For your next family dinner – bring our Locatelli Meatballs to the table for a taste of Sicily. 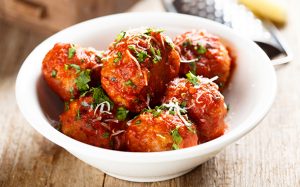 This rustic Mediterranean island just south of Corsica and 220 miles off the coastline of Rome has a cuisine all its own and also happens to be the home of Locatelli cheese! In the mountains and inland areas, meals revolve around meat, especially lamb as well as sheep’s milk cheeses including your favorite Locatelli products! All along the coasts and on the smaller surrounding islands, it’s all about seafood including the delicacy of Bottarga; dried fish roe that’s shaved on pastas, vegetables, and stews. The Catalan influence can be seen in the popularity of lobster stew, which is served similarly in Spain. Fregula is a unique variety of Sardinian pasta that’s similar to couscous and another specialty of this special island.

Learn more about Sardinia and Locatelli’s history of cheesemaking on the island here!

Rooted in generations of Italian cheesemaking tradition; our land, our sheep, and our cheeses are not only truly Italian but truly special as well.

A Family Brand of